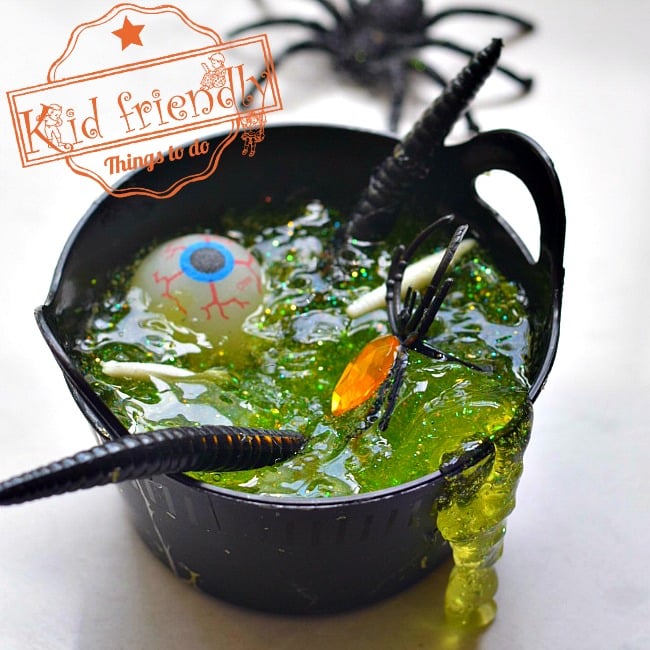 For whatever reason, I am on a slime kick this summer. My kids can’t get enough of the texture of slime through their fingers. Bear with me while I throw out a couple of Halloween Slime Activities over the next couple of weeks. They are really sort of the classic recipes with some fun ways to display them.  This one is my Witch’s Brew Glitter Slime Recipe for a Fun Activity with the kids this Halloween.

I thought it would be fun to take an ordinary sensory slime recipe and add witch’s brew ingredients. Of course it wouldn’t be a brew without a cauldron, so that’s what we are going to put it in. I think this would be such a fun activity for a Halloween Party and a fun party gift for the kids to take home. 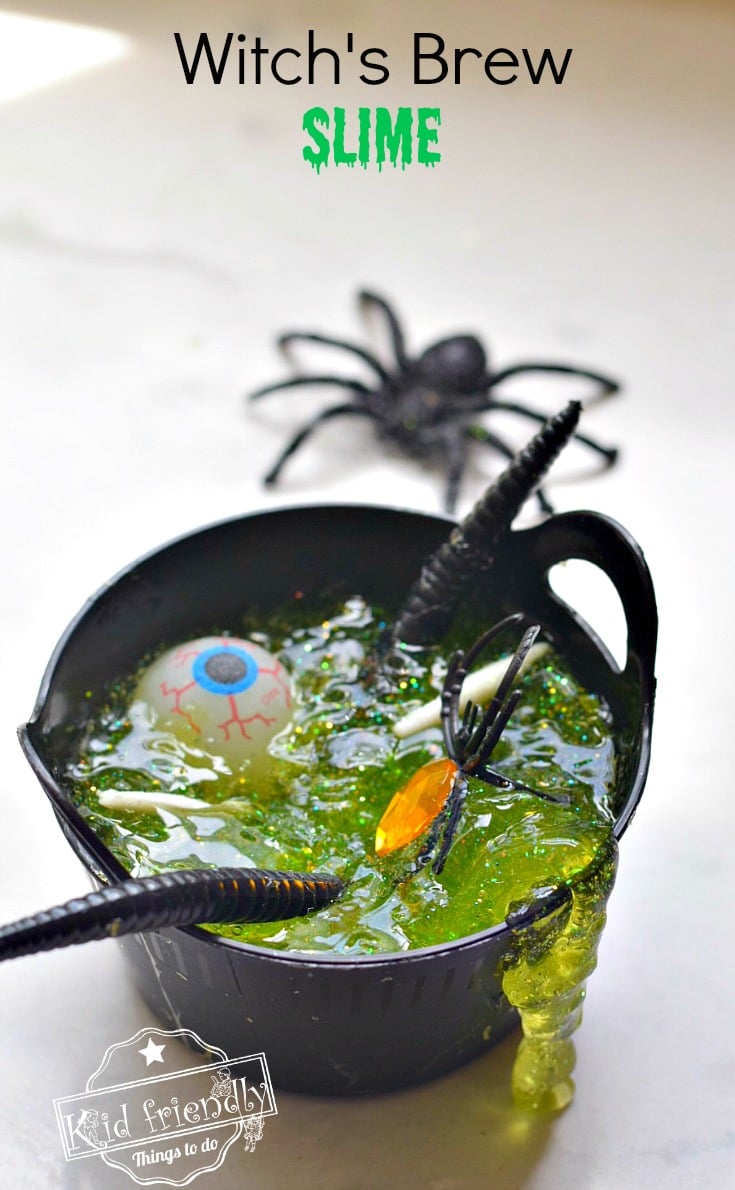 I have to tell you…the teenagers love this stuff as much as the kids. My teenager gets home from school before the little ones. I was actually hiding the slime (I know, mean!), because I wasn’t sure that my pictures came out. I didn’t want the kids adding their stamp on the slime until the pictures were, for sure, done. Abi immediately noticed slime ingredients and kept bugging me to let her squish the slime. My younger kids are usually the ones that bug me to buy more glue colors, and whip up a batch over the weekends. I didn’t really know that my teenager was just as obsessed. It’s a lot of fun for me, so it should’ve been a no brainer that a teenager would love it too.

If you don’t really care for using Borax in slime…here’s an alternative recipe for your glitter slime that uses baking soda and contact lense solution – interesting! Click Here to go to Elmer’s Glitter Glue Slime Recipe

Precautionary note: As always – be sure to supervise your little ones with slime. The slime is not meant to be ingested. Wash hands after playing with any slime activity.

A Note about Storing your Slime   – This slime recipe is really best when played with immediately. But, you can store it in an airtight container for more fun the next day. What you should expect from next day sensory slime is a very different kind of play. It may have thickened up a bit more. Any type of sensory object that you add to a slime recipe will not bind with slime for an indefinite period of time. When your children play the next day, the objects will pop out of the slime. It’s a totally different kind of fun to watch the objects burst out of the slime and bounce everywhere. Put the slime and objects back in your container, and – in a little while – the slime will ooze back around the fun toys for repeated fun!

I hope you enjoy this fun Halloween Activity. Please do follow me on social media or subscribe to get my latest and greatest ideas and posts.