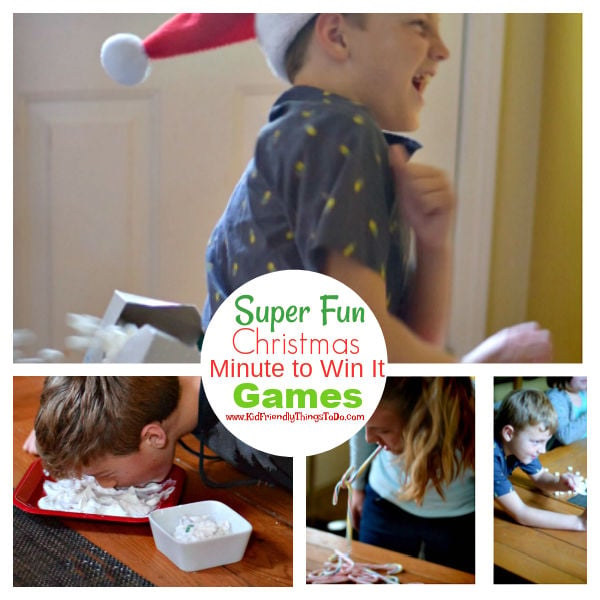 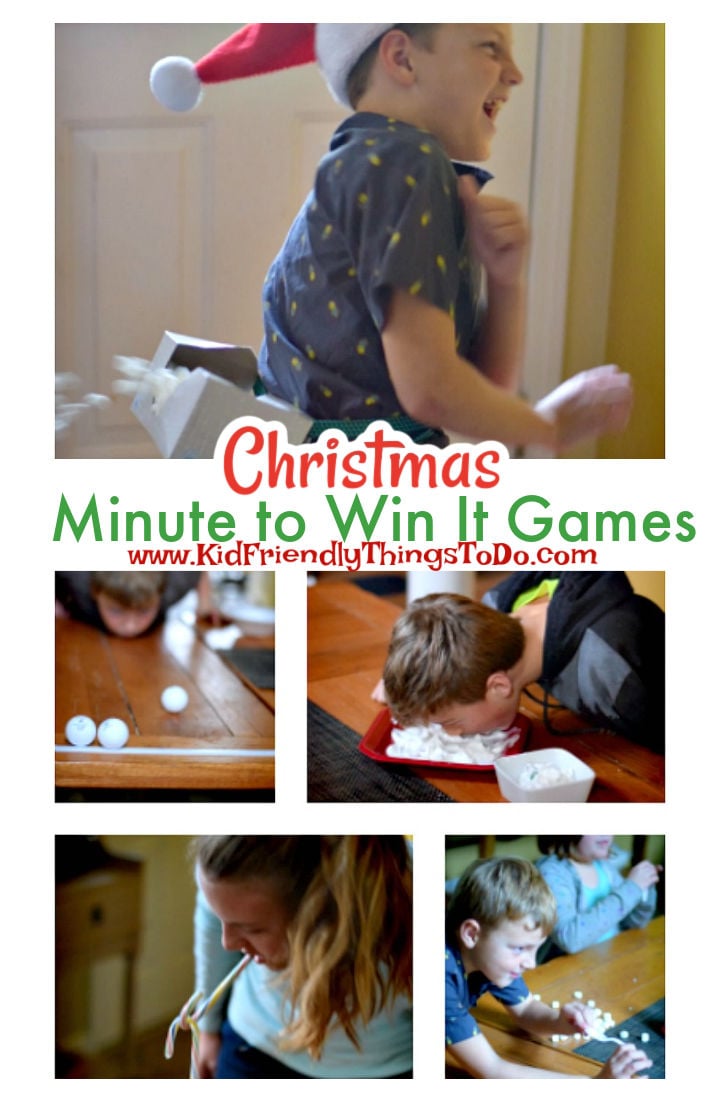 Above is a short video of just SOME of our favorite Minute To Win It Games. You’ll find these games and more in the links below.

What are Minute To Win It Games?

A while back the network NBC hosted a game show called Minute To Win It. Contestants tried to complete challenges in under 1 Minute. When they completed the challenge correctly, they were able to advance to the next level.

Games started out as low-level games and moved to higher-level (more difficult) games. The players were there to ultimately win a cash prize.

How to Play Minute to Win It Games

One Player at a Time Version (Small Groups) –

A player will go up against the clock. Tasks must be completed in under 1 minute. If they perform the task in under one minute – you can award a certain number of points.

Tasks too hard to complete – If another player will go after the participant, then they can compete to see who does the most in under 1 minute. The player that does the best, will get the points.

One player per team will go head to head. The players should swap out for each game so everyone has had a turn to compete at least once for their team.

Scoring Minute to Win It Games – 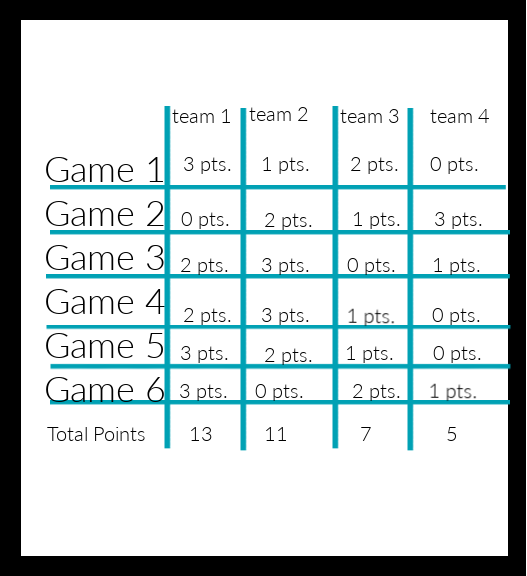 Using an easel and a big whiteboard is an excellent way to keep track and see how the game is progressing.

For this game…you’ll need – a bag of mini marshmallows – divided, a plastic spoon, and 2 players per team

One more version to consider:

Use large – not giant – marshmallows. Throw them to people sitting in chairs across the room. When they catch one in their mouth, they spit it out onto a plate as a collection of how many they successfully caught. In the end – count the marshmallows on the plates to see who won

Next up…Game 2 – Avalanche! Also called Junk In the Trunk!

Here’s a quick video showing how we played this game…

*I found the tape in the Craft Adhesive section of Wal-Mart. The tape is not the scotch tape clear version. It was removed from my table without damaging it. I’ll leave a link below for some removable double-sided tape. 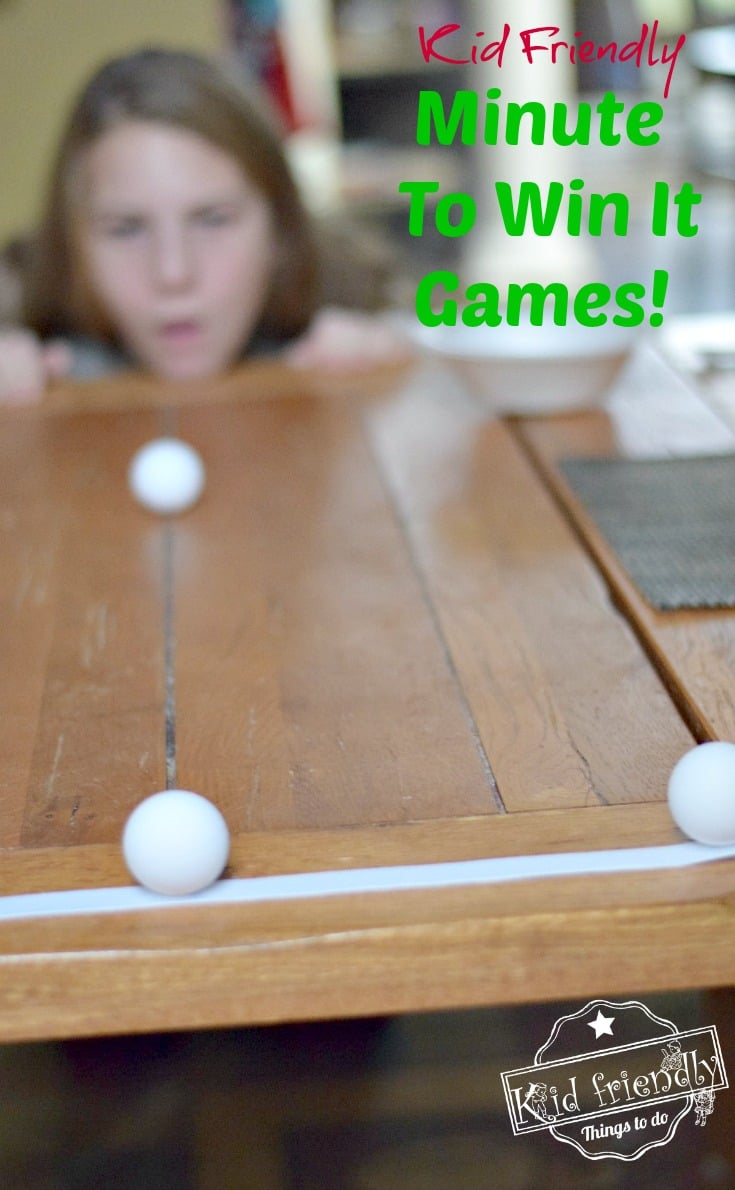 Here’s the link I promised…

For this game, you’ll need 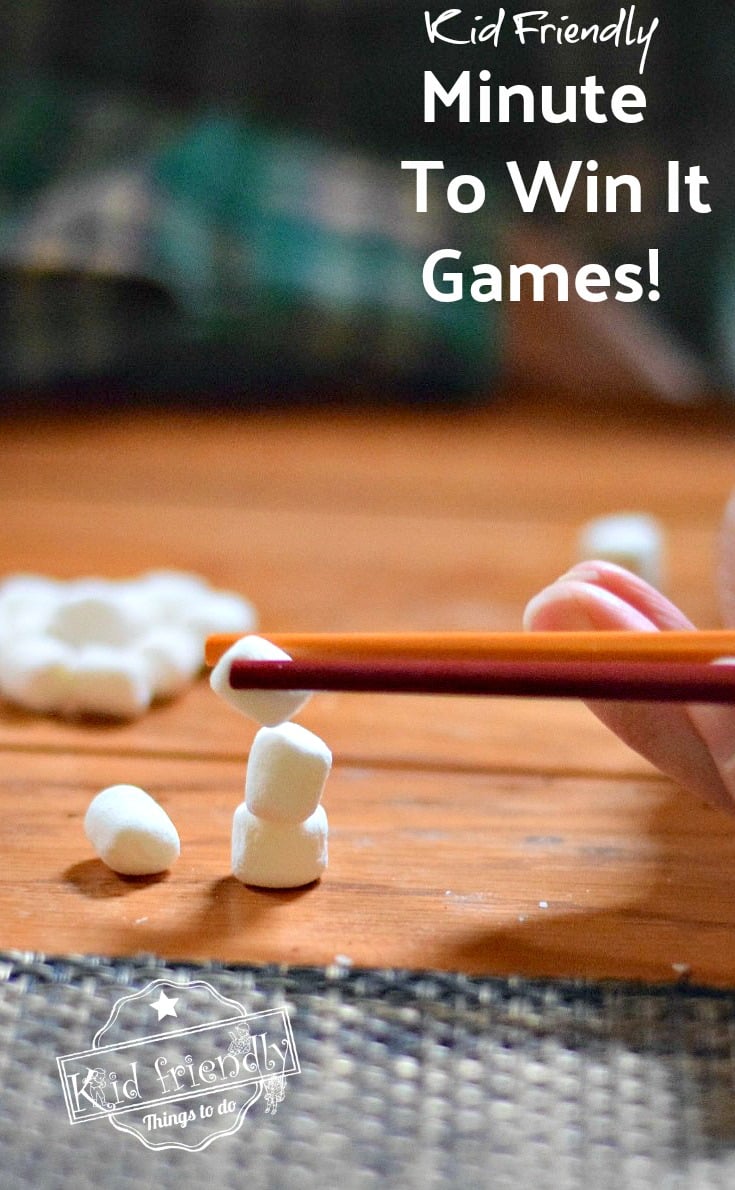 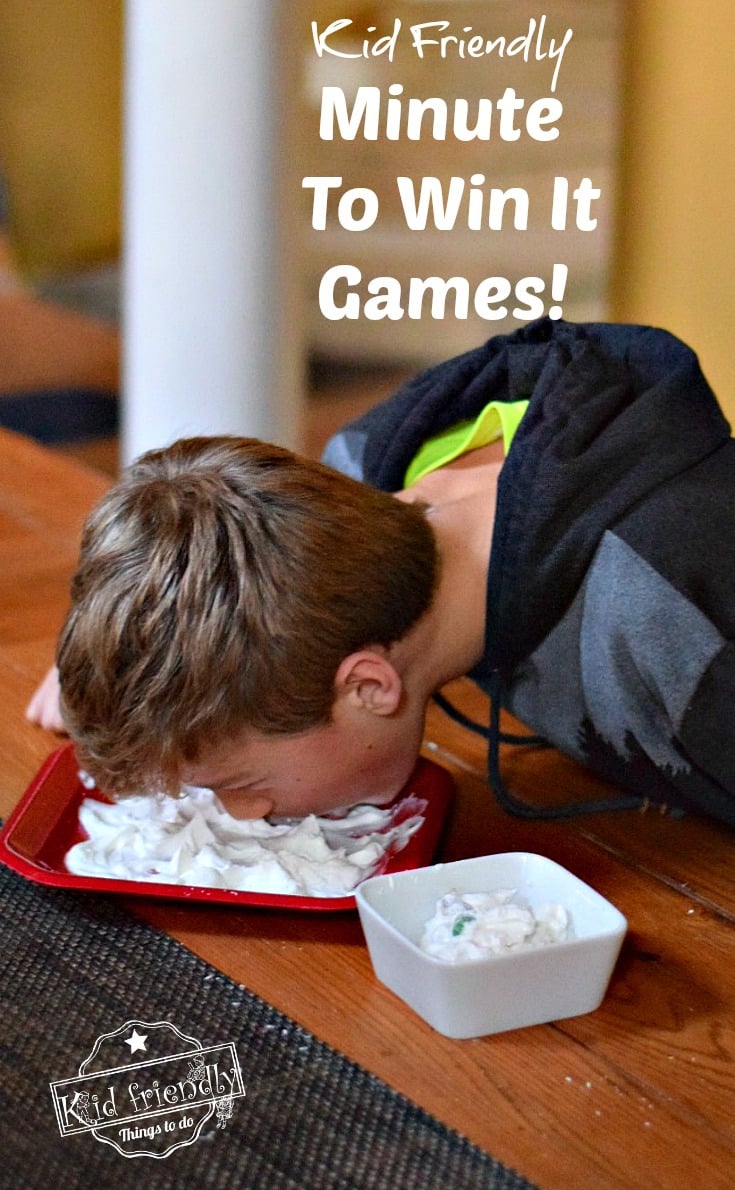 For this game, you’ll need – Whipped Cream (it’s easier if you get the squeeze bottles), about 30 gumdrops per plate, a plate, and a bowl 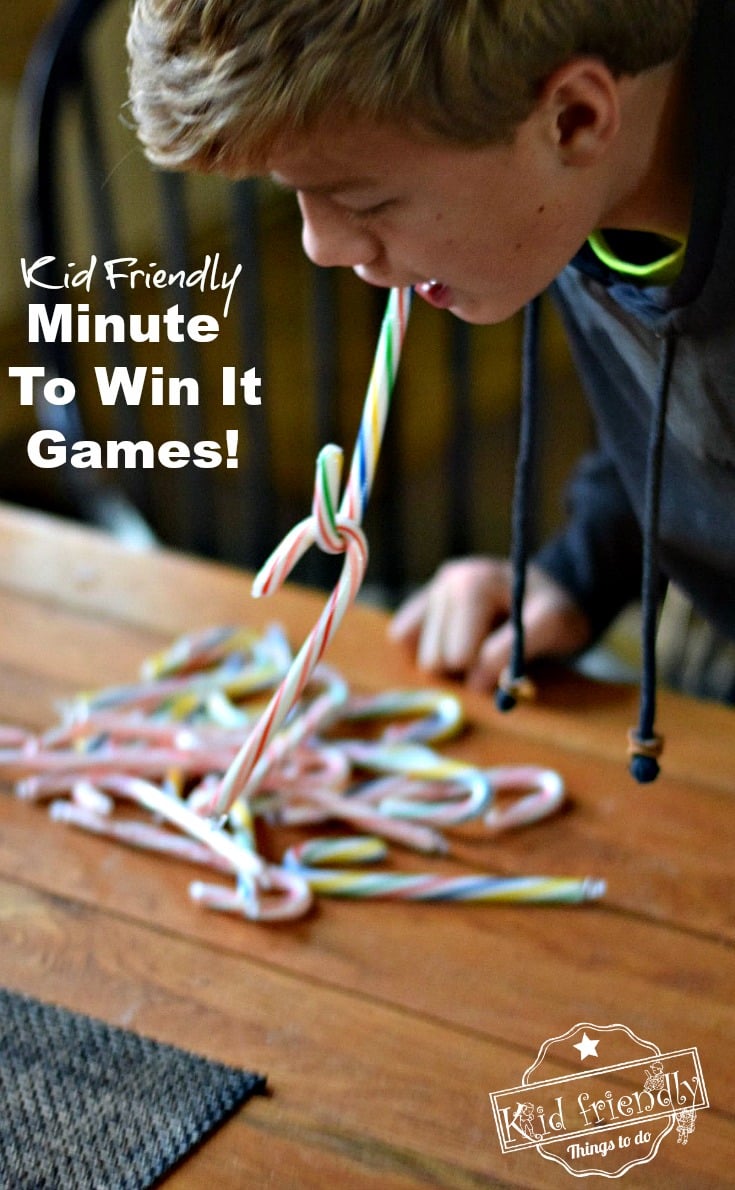 For this game, you’ll need 2 packages of Candy Canes plus a candy can for each player to hold in their mouth

This game is harder than it looks, but everyone wanted a turn at this!

The original version is a  – Level 4

This version – Level 1 or 2 (easily enjoyable for kids) 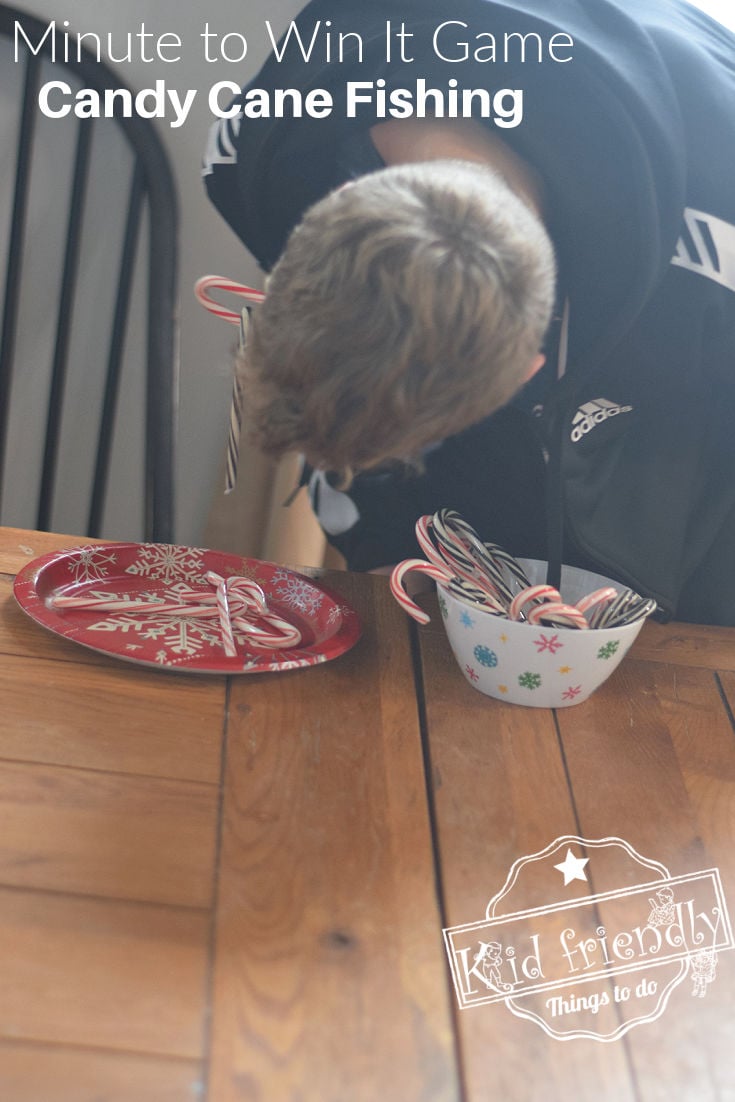 The difference is that we set the candy canes in a bowl. This gives the player a little bit of leverage and they can truly compete with getting as many candy canes over to the plate in under 1 minute as they can to beat the other team.

For this game, you’ll need – 1 heavy bowl and another bowl (doesn’t have to be heavy – paper plate can be substituted) plus 1 dozen cotton balls that have been pulled apart – or – an easier alternative would be to use mini marshmallows and a spoon!

That’s it for now! I hope you have enjoyed our Minute To Win It Games for Christmas.

I have more cooking in the oven and I’ll post those just as soon as I can get all of the supplies, find a good day to play, and edit a million photos. Until then, check out all of my other Minute To Win It Posts right here on the blog!  Check out the links below… 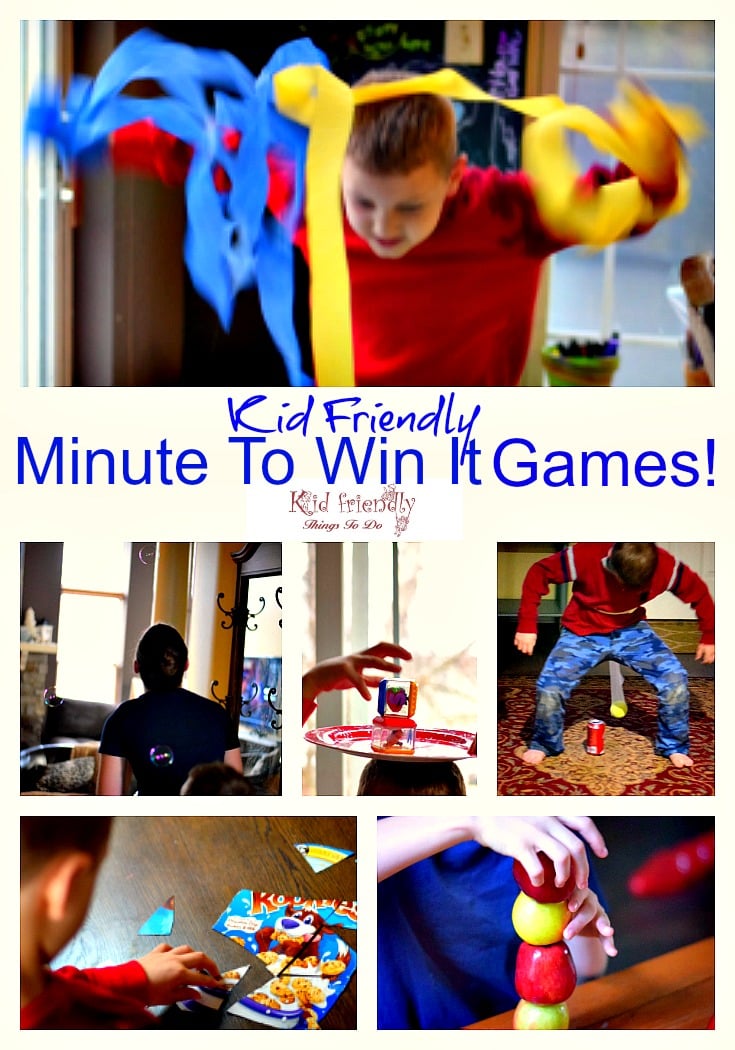 Here’s a link to the Minute To Win It Games above – Our 2 favorite games from this lot are the bubble-blowing one and the streamer paper one! So funny! 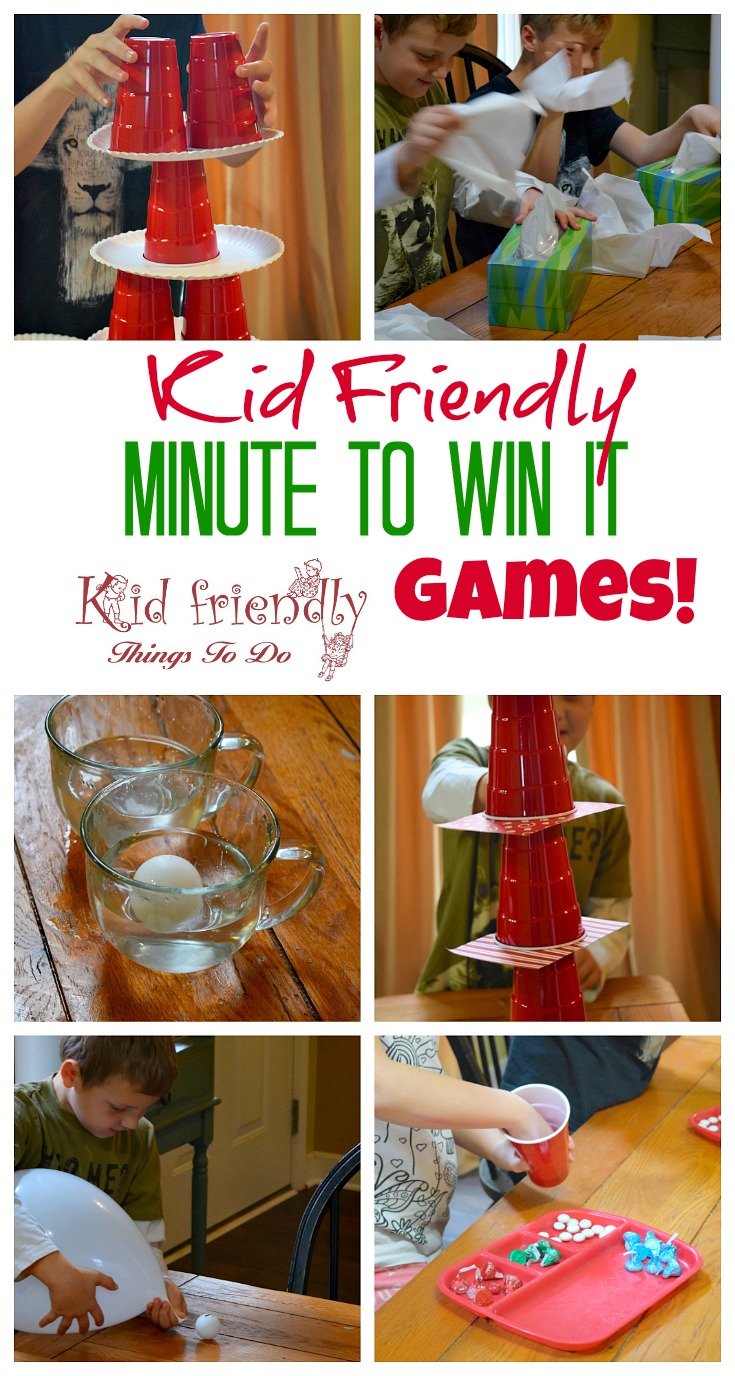 These are all a ton of fun! You can’t go wrong with any of them. Here’s a link to these Minute to Win It games! 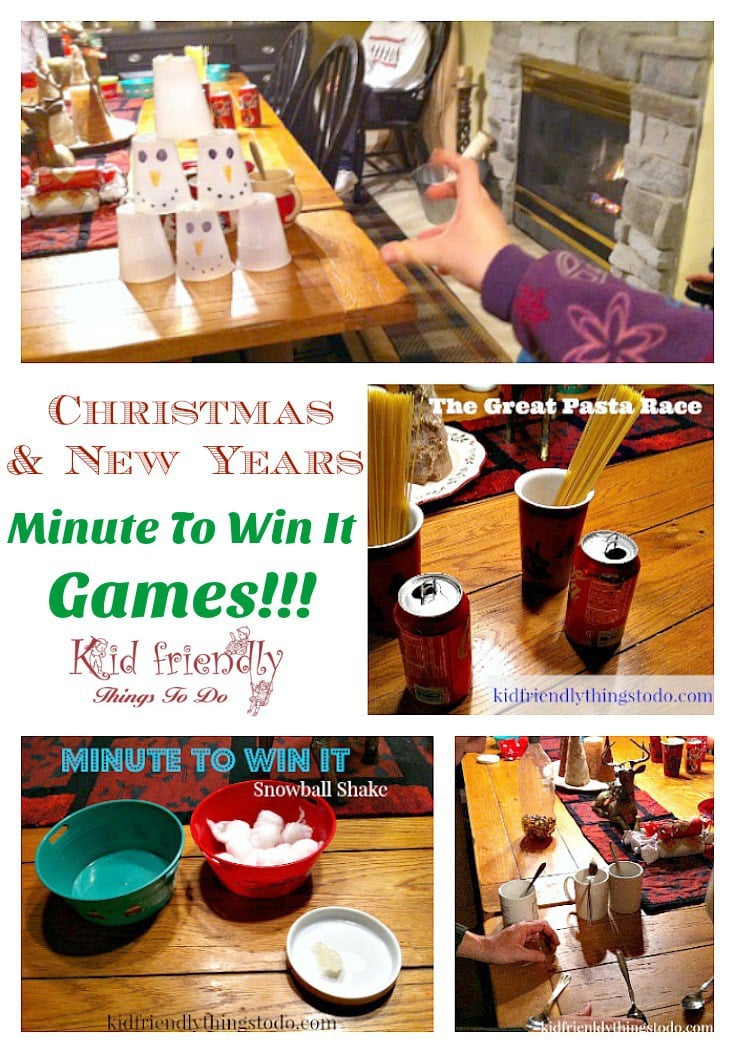 Tags: Super Fun Kid Friendly Minute To Win It Games with a Winter and Christmas Theme!