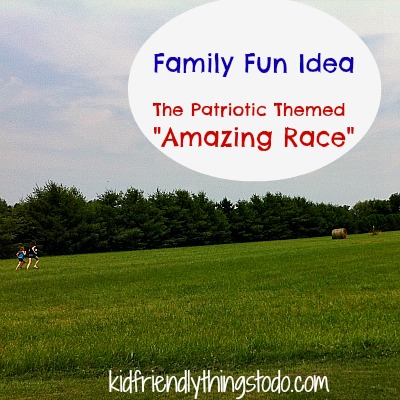 This post is full of fun family games and challenges to play outdoors. Maybe you’ll be inspired to make your own version of our Amazing Race Tradition! Here’s our Annual Patriotic Themed Amazing Race.

Are you looking for fun outdoor games to play? Check out some of these fun ideas…

The Amazing Race – A New Family Tradition! I love traditions. I know how meaningful these family ceremonies are in keeping the roots of the family spreading deep. So, I try my best to not only have the little traditions we carry on as a family of six, but to also have the important traditions that include a larger family spectrum (Aunts, Uncles, Cousins, and Grandparents). With everyone home for a bit, I thought it would be fun to start a Fourth of July, American Themed, Amazing Race. Everyone had so much fun, that now the Halloween Themed Amazing Race is in the works! Maybe you’ll be inspired to make your own version of our Amazing Race Tradition! Here’s what I did to pull off my idea of a The First Annual Patriotic Themed Amazing Race.:

Over 25 Camping Tips, Hacks and Recipes for Camping with Kids

Carrot Toss – A Fun and Easy Easter Game to Play